During last month’s Laurel School Board meeting, the board approved a proposal to rename the district’s teacher of the year award after former teacher and school board member Cora Selby. It was also announced that the board will celebrate students and staff at future meetings, beginning this month. 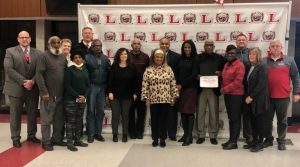 The family of the late Cora Selby is presented with a resolution proclaiming that the Laurel School District’s annual teacher of the year award will be named after the former Laurel educator. The announcement was made at last month’s Laurel School Board meeting.

Superintendent Dr. Shawn Larrimore presented a resolution to Selby’s family during the board meeting on Dec. 8. Selby taught in the Laurel School District from 1941 to 1987.

“You didn’t fear her but you revered her. You never wanted to disappoint Cora Selby in anything you did,” Larrimore, who had Selby as a teacher, said. “I hope that this makes her proud.”

“She is definitely a star in my sky,” Vice President Sabrina Isler said of the late educator. “She was one special lady.”

Larrimore also reported that he received an email from someone from the Department of Education’s Technology and Data Office, complimenting Laurel Supervisor of Technology Michael Brown. Larrimore presented Brown with a certificate of recognition during the board meeting.

The next Laurel School Board meeting will take place Jan. 18 at 7 p.m. Board President Linda Hitchens reported that directors and principals reports will no longer be presented at every meeting. The board will go back to celebrating students and staff members and highlighting a program during board meetings.

“We want to go back to the way it used to be,” Hitchens said.