The Laurel High School band placed third in its group at the Tournament of Bands regional competition in Hershey, Pa. on Oct. 31. The competition was the culmination of months of hard work by the band, led by middle school and high school band leader and music teacher Jason Rogers. The achievement is even more impressive given the challenges the band faced through the COVID-19 pandemic.

“Our kids came back this year performing in class and working like they always have. They have made great strides,” said Rogers. “The competition is very tough.” 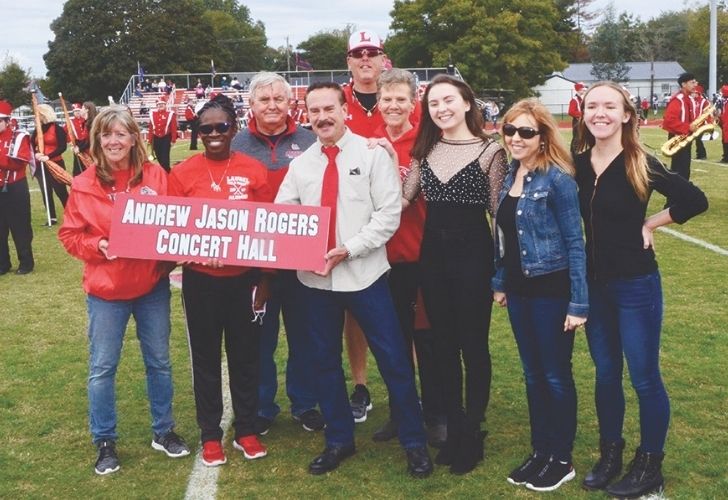 Laurel band leader and teacher Jason Rogers is shown with his family and the Laurel School Board after being honored during half-time of the homecoming football game last month. Photo by Mike McClure

Laurel performs a drum corps style, which involves constant motion and a formal marching style. It is a member of chapter nine of the Tournament of Bands. Bands need to achieve a qualifying score of 80 or above to reach the competition. In the past, 17 to 18 bands competed in the same category as Laurel. This year only five signed up and Laurel was one of only three bands to make it as a finalist in its class, which features bands with 50 or more musicians from throughout Delaware, Maryland, Pennsylvania, and New Jersey.

Due to COVID, the Laurel band was not able to have regular rehearsals last year. Even by this spring, only about one third to one half of the student population was in the school, with the rest doing remote learning.

“We essentially lost a whole year of performing because of COVID,” Rogers said.

And still, the band played on. Laurel’s marching band was one of the few bands in the state to do a field show during the football season last year.

THE JOURNEY- Members of the band are asked to learn their steps and memorize the music they perform during competitions and games. They also have to learn to hit their marks with their peripheral vision while playing their instruments.

“That (learning to hit the spot) is a time consuming process in our practice,” said Rogers, who added that constant movement is part of the Tournament of Bands. “The demand of your show has to be high. I’m just fortunate to have so many talented people to help me.”

The process for the band begins in January, with the band practicing once a week. By May, the band members need to have their music memorized. In the summer they learn the drill in time for the first football game in late summer, during which the band performs the first song or two. The whole show is performed by the end of September.

“You can demand more of yourself if you have it memorized,” Rogers said. He added that because the band members have the music memorized, it allows them to be able to perform at a higher level.

During the competitive season, the band practices every Monday, Tuesday, and Thursday from 3-5:30 p.m. On Wednesdays, band members gather for personal practice, homework sessions and individual group practices. It takes a big commitment to be a member of the band. Often the students also have jobs, in addition to keeping up with their grades.

The band practices for two solid months during the season, then practices as needed after the competition. “I don’t like downtime for the kids. I don’t want them to lose interest,” said Rogers.

“I like doing that because they become future leaders,” he said.

Rogers is working with two sets of beginners (fifth grade and sixth grade) this year because he wasn’t able to start beginners last year due to the pandemic. When the schools were doing remote learning, he taught music theory and music history remotely.

Rogers believes participating in the band helps students work in a collaborative environment as teammates, learn leadership skills, and participate. He says every member of the band is critical.

The band is already looking forward to next year. It will perform music from the broadway show In the Heights, which was made into a movie and released over the summer. The band members brought the music to Rogers, something he has let them do most of the time he has been the high school band leader. He says it gives them ownership and teaches them how to make decisions.

“I rely on my upperclassmen to help teach the newbies. If I don’t have all that support from my students this job wouldn’t get done,” he said. “They understand our mission and what we do. It’s like a machine, it has to work together.”

“If you’re going to have a band you have to build a culture of support because we spend a lot of time practicing,” Rogers said.

HONOR- During half-time of the Laurel homecoming football game, Rogers received a surprise. The Laurel School Board paid tribute to him by naming the high school/middle school auditorium the Andrew Jason Rogers Concert Hall, after him.

“It was a complete surprise,” said Rogers, who said he doesn’t look at social media. He was joined at the game by his family after the district reached out to his wife. “My family doesn’t usually attend games.”

According to Superintendent Dr. Shawn Larrimore, students reached out to board about honoring Rogers. The board has been looking to honor past and present staff members.

“They couldn’t think of a better time to do it than on Homecoming weekend in front of his family and his admirers (in the band),” Larrimore said.

Larrimore attends some of the band’s competitions and sees the impact Rogers has on the students’ lives.

“People are coming to Laurel and are staying in Laurel because of Mr. Rogers,” said Larrimore. “For a lot of people he’s a father figure and for people that have fathers he’s an uncle figure.”

Larrimore also attends the Laurel football games and sits near the band at away games. He sees band members’ interactions and how the band comes together as a cohesive unit.

“You can just tell they all like being around each other. That’s what Jason does,” he said. “They get to choose these brothers and sisters and father figures. Jason is the maestro. He’s done great things for us and we love him and appreciate him. It’s (the honor) the least we could do. He’s done so much for us.”

“I like that I’ve had a positive impact with what’s happening in the community with supporting music,” said Rogers, who has taught at Laurel since 1987.

Rogers was born and raised in Baltimore. He taught middle school only for 25 years, now he teaches high school and middle school.