Laurel woman credits faith, job and family for her recovery

Shortly before being diagnosed with breast cancer, Mary Lewis completed remodeling a room in her Laurel house that was to be designated as her prayer room.

To start out, it was decorated with pictures of scenes and animals from Africa. But that soon changed. 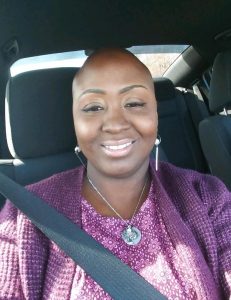 “When I got diagnosed, I came in here to pray,” Lewis said. “Immediately, the Lord spoke to me, just one word: ‘Change.’ ‘Change what?’ I didn’t understand what he meant.

“I started looking at the pictures, and then I understood that he was telling me that I had to remove them. Not that they were bad, but the room had to be ready for the place I was getting ready to go into.”

Lewis took the pictures down from the walls. Then, whenever she went into a store, she found that she was stumbling across signs and posters with scripture written on them. “It came together,” she said. “I understood what he wanted me to do.”

Now, the walls of Lewis’ prayer room are decorated with several biblical verses: “She believed she could, so she did” (based on Luke 1:45, “And blessed is she that believed: for there shall be a performance of those things which were told her from the Lord.”) “Be still and know that he is God,” from Psalm 46.

And Lewis’ favorite Bible verse, from the Old Testament book of Zephaniah, chapter 3, verse 17: “For the Lord your God is living among you. He is a mighty savior. He will take delight in you with gladness. With his love, he will calm all your fears. He will rejoice over you with joyful songs.”

That room is one of several things that Lewis credits for enabling her to get through her cancer treatment and recovery. While she is still undergoing physical therapy to improve movement of her left arm, and still being treated for edema that occurred as a result of her surgery, she has completed her chemotherapy and radiation. “I’m doing wonderful,” she said.

Lewis was diagnosed with cancer in October 2018 and underwent a lumpectomy the following month. When a PET scan showed enlarged lymph nodes, she also had surgery to remove them (subsequent tests showed that they were benign).

Her chemotherapy started Jan. 5, 2019, and was completed May 14. Those treatments were administered at the Allen Cancer Center in Seaford, now part of TidalHealth.

Radiation treatments at the Tunnell Cancer Center, part of Beebe Healthcare, were started on June 25 and continued every day until Aug. 4. (They were given at the Tunnell center because the Allen center did not have the specialized equipment that was required to prevent the treatments from harming Lewis’ heart.)

Lewis has had two biopsies since then, both benign. She has also consulted with doctors at the Cancer Treatment Centers of America facility in Newnan, Ga., who reviewed, and approved of, everything her doctors here had done.

“They were very nice, and complimentary of doctors here and treatments I had had,” she said.

Throughout her treatment, Lewis cared for her father, Percy Johnson, who just turned 95 and who lives at Laurel Commons. She also worked as the property manager at the Woodland Mills housing complex in Seaford. She is now property manager at Riverview Gardens, Denton, Md.

Her job is stressful, she said. “But I’ve been doing it for about eight years. And I love doing it, because I love helping people. On some days, I would say, ‘Wait a minute,’ and shut the office door and take a moment to breathe. But I stayed busy; I never missed a day of work. Staying busy was a good thing.”

In addition to her prayer room, her church — she attends Dominion Church of Delaware in Harbeson — and her job, Lewis credits her family for helping her to get through her treatment. Her children “were awesome,” she said. “They took care of me at home.”

And a cousin, Tetula Sturgis, gave her rides when she was too tired to drive home after receiving chemotherapy.

Lewis also praises the care she received, especially at the Allen Cancer Center. Her nurses, Doreen Steeley, Leah Carlucci and Samantha Yegros, “all treated me so well,” she said. “They were all so sweet, so gentle, so welcoming. It takes a special person to be able to give somebody chemotherapy, treatment of that magnitude. And I do not take them for granted. I’m very, very grateful that I had those nurses.”

Lewis has spoken publicly about her experience a couple of times, including on Sunday at New Holy Trinity Church in Millsboro. Her advice to women who have been diagnosed with breast cancer: “Stay positive. Endow your mind with nothing but positivity. It takes a great mindset to go through chemo. And you have to stay upbeat.”

Not that she hasn’t had her moments of doubt. For a few days last fall, “I was mad with God,” Lewis said. “I didn’t read my Bible, I didn’t pray. I only went to church on Sundays.”

Then one day, when she was demanding to know how she had gotten sick, and why it had happened, God answered her.

“He told me that how it had happened was because he allowed it to happen,” she said. “It was something that needed to happen — people needed to hear my voice. And why did it happen to me? Because he trusted me, he said.

Toward that end, Lewis is writing a book, tentatively titled “Walking in the Body of the Breast,” or “She is Clothed in Dignity and Strength.” She hopes that it is available by Mother’s Day.

“My go-to word is HOPE, ‘Having Overcoming Positive Energy,’” she said. People who have been diagnosed with cancer should “just stay positive. People want to come around, and that’s OK, but if there is anything that you know is going to pull your high spirits down, stay away from it. For what you have to do, you will need all your energy.”