As Delmar athletic director and driver’s education teacher David Hearn sifted through 30 years of accumulated mementos in his office, he remembered many of his current and past co-workers and colleagues. Hearn recently announced his retirement after 30 years with the Delmar School District, 40 years overall. Though he is not one for the spotlight, it shined on him during the pre-game ceremony of a recent basketball game as the district and its administration and employees paid tribute to the leader of the athletic department and high school football team.

The attention continued last week as he received a variety of desserts, including a German chocolate cake that the cafeteria workers made for him and cupcakes with his picture on them from the coaches. The ladies in the office even made up a song for him and sang it to him on Thursday. 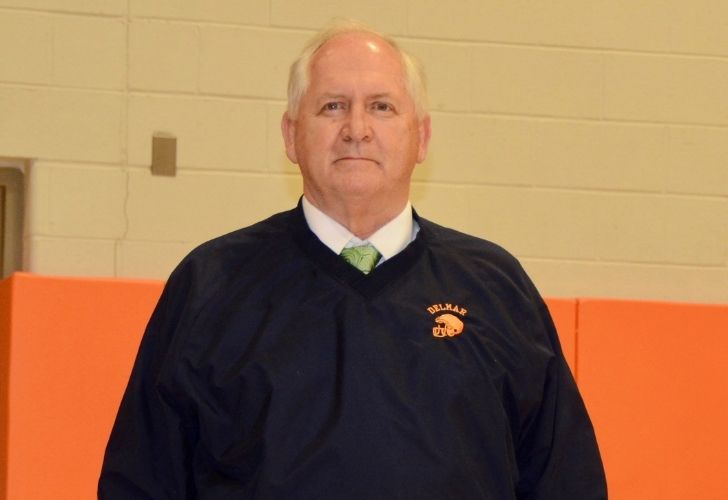 For many, Hearn has served as a mentor and role model, not just for his students and players. The Delmar High School principal first met Hearn when he student taught at the school.

“He’s probably one of the most influential people on myself and my career,” said Michael Bleile, who served as an assistant baseball coach for Hearn for eight years. “It’s been an absolute pleasure to work with him the past 13 years at Delmar. I’m going to miss him dearly.”

Odell Jones, Jr. has known Hearn as a student and player before later serving as an assistant coach and assistant athletic director under him.

“He’s the reason why I got in education and have had the pleasure of serving beside him for the last 20 years,” Jones said.

Jones has learned many life lessons from Hearn including the importance of being a better person, character, putting family first, and having pride in your community.

“Every morning and every day we talk about different things,” said Jones. “It’s (Hearn not being at school) going to be weird.”

During her time as a scorekeeper at football games Michelle Niblett learned a lot watching coach Hearn on the sidelines, how the kids, coaches, and officials responded to him. When she had a big win or a tough loss as a coach, she went to him to talk about it.

“It was therapeutic to know he was there and to be able to go to him and talk to him about everything,” she said.

So while the coaches, staff, and administration knew he wouldn’t like being thrust in the spotlight, they believed he needed to be saluted prior to his retirement.

“I was glad that they did that (ceremony) for him,” said Bleile. “He’s not much for individual accomplishments.”

“For me it was emotional because I didn’t want to see him go,” Niblett said. “It’s a huge loss for our school.”

“I thought it was wonderful. He’s done so much for the school and the community. It is never enough, but it was definitely worth it,” added Delmar Athletic Trainer and new Athletic Director Craig Yingling. “You can’t thank him enough for everything he has done. He has given 30 years of his life and countless hours away from his family.”

Hearn appreciated the moment, “It was very nice. They went to some trouble to do that. It was about the school, not just me, it just happened to be me.”

So what will he miss following his retirement as athletic director and teacher? That’s an easy one, the people.

“That’s what you miss the most,” he said. “All the people around us, I really enjoy. I’ll miss them.”

David has a lot of fond memories of current and past coaches, players, co-workers, and colleagues. He enjoyed meeting and getting to know coaches and athletic directors at other schools, including George Glenn, Ron Dickerson, Ben Sirman, Kay Smith, and Jim Harvey. He will also miss his current coaches/co-workers including Odell Jones, Jodi Hollamon, Chad Jones, Alan Preston, and the kids.

“I’m lucky to do the job that I wanted to do. I like talking to kids and the fun of being around other people,” said Hearn.

He will also miss the cafeteria lunches, 36 years of them including when he was a student at the school. He also enjoyed joking with the custodians and talking to the support staff. “You take for granted all those little things,” he added.

He has also enjoyed working with long time assistant coaches Mike Dorsey and Bobby Ellis (all 30 years) and many other coaches that have come through the program. Many of his former players are now on the coaching staff, including Jon Layton (quarterback on the first Delmar team Hearn coached) and Odell Jones, who have served as coaches for over 20 years.

Hearn said he won’t miss the grind of the work week, or receiving a task from the school’s administration without being able to give his input. “There’s really not much I will not miss,” said Hearn.

But after 30 years with the Delmar School District, and 40 years overall, Hearn said it was time to retire.

“Forty years is a long time,” he said. “That (working 30 years to reach full retirement) has always been my goal.”

David planned to retire early to help take care of his mom, who was sick. Unfortunately, she passed late last year.

He also said there are many demands that go along with being the athletic director, especially during COVID. Odell Jones helped him by fielding many issues including scheduling.

“Without Odell I don’t know where I would go,” said Hearn. “He’s a special one.”

Hearn plans to spend some time with his grandchildren (and cats and dog). He and his wife, Judy, will celebrate their 39th anniversary in June. The couple met while attending Shepherd College. A native of Northern New Jersey, Judy taught art at Delmar for 20 years.

They have three children, sons Jordan and Travis and daughter Brooke, and six grandchildren. Jordan is in the Navy and is stationed in Hawaii, where he and his family live.

During his career, Hearn has coached everything from gymnastics, tennis, and wrestling, in addition to football and baseball. Following graduation from Delmar, he attended Shepherd (West Virginia) and worked for 10 years in Loudon County, Virginia before coming back to his alma mater. Greg Budd was the school’s athletic director during the first year, Hearn has filled the role ever since. Before his 29 year tenure as AD, nobody had served in the position for more than four or five years in the district.

Although he had been away from Delmar for a number of years, he was no stranger to the community, in part because his parents were well known. Hearn’s mom worked in the school cafeteria for 30 years and his dad worked at the post office for 30 years and was known as one of the school’s best baseball players, which earned him one of the first spots in the Eastern Shore Baseball Hall of Fame.

“People knew him as a person around town and my mom was the same way. I had that tie,” Hearn recalled. “Parents knew me, so they trusted me. That made it easier coming back to my hometown. Even in the bad years they were a little more forgiving than if I was an outsider.”

David got into education because he enjoyed school when was a student.

“I credit that to my teachers,” said Hearn. “My parents knew them all (older staff at high school), so they all knew me. That was good and bad because they expected things.”

As for coaching, that ended up being a substitute for his childhood dream of becoming a pro baseball player.

Hearn is known throughout the community as both a coach and a teacher. As Bleile pointed out, he is responsible for most of the drivers in town.

“He’s a phenomenal educator, he’s just a phenomenal person,” said Bleile. “His big heart carries over into the classroom and into everything else.”

David’s community ties have led to longtime friendships. He grew up with Odell Jones’ dad.

“I guess I’ve always known him,” Jones said, adding that as a student and player he saw Hearn as an intimidating figure that you didn’t want to cross.

Niblett, who has coached at Delmar for over 20 years and has worked at the school for 16 years, has also known Hearn her whole life. Their dads were best friends as kids.

One thing that is undeniable is Hearn’s love of the town of Delmar and the Delmar Wildcats.

For Niblett, that love of the school came through during pep rallies. He showed his pride in the town, students, and athletes during his speeches at these events, thanking everybody involved with the big game.

“He appreciates you and you never have to wonder. He tells you what’s on his mind and he’s straight forward,” Niblett said. “He loves Delmar.”

Yingling said that in addition to being a good role model for the kids, he brought a wealth of knowledge about the school and its programs. In addition to his knowledge of local sports and his school, Hearn is also a history buff. He taught U.S. history and social studies in Virginia and for a year or two at Delmar.

Hearn is thankful for all of the community support he and the Wildcats have received over the years. Members of civic clubs such as the VFW, Lions Club, fire department, and Kiwanis attended games and helped support the school as well as the little league and Saturday youth basketball league, along with other organizations.

He also appreciates the community’s support at football games, both home and away. Hearn recalls playing Smithsburg, a school in the Frederick/Hagerstown, Md. area, and having as many fans at the game as the home crowd.

Although they lost the game, many fans still remember going to Butler, N.J. in 2003 to a game. The trip to the school offered a view of the Statue of Liberty.

“They’re a smart crowd, they know what’s going on,” said Hearn. “They’re supportive. When we’ve needed something they were there.”

As of last Friday, his last day before retirement, Hearn was leaning toward staying on as the Wildcats’ head football coach. He wanted to talk to his veteran football coach, but felt like he didn’t want to leave following this past season, which he called a mess which ended on a flat note. Delmar had three football games cancelled because of COVID issues at opposing teams’ schools. As a result, Delmar didn’t make the playoffs despite winning three of their four games.

“They (coaches) feel football owes us a year. They want to try it one more year,” Hearn said.

If he continues to coach, retirement will offer him a chance to focus on just football, something that other coaches such as Bob Tattersall and Joe Hemphill have done (retire from the school and continue to coach). He hopes to have a decision about coaching football by May.

In the meantime, Hearn is looking forward to going to the beach or sitting in his front yard. Anything that provides him with some much deserved peace and quiet.

“It’s kind of a bittersweet thing. It’s like when you graduate. Kids can’t wait to graduate then they’re scared to leave,” said Hearn. “It’s a different chapter, a different challenge.”