Danny Bostwick and Rick James were best friends. So when Bostwick, owner of Daniel Bostwick Photography in Seaford, started a program to provide a grant to a veteran who is starting a business, it was only natural that he dedicate it to James, a Marine who was killed in Iraq in 2006.

“When you are 18, and your best friend is killed in a war you don’t quite understand, it changes you,” Bostwick said. “Rick’s death made me think about how he would want me to proceed with my life. He was a go-getter, and he wouldn’t want me sitting around complaining. He would want me to get in there and do something.” 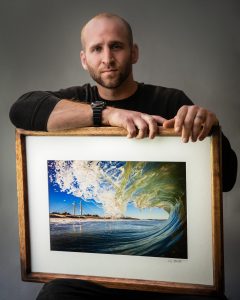 Photographer Danny Bostwick holds a framed photograph of a wave at the Indian River Inlet. Bostwick, owner of Daniel Bostwick Photography, Seaford, used some proceeds from sale of the photo to buy gift cards for area essential workers and to start a fund for a grant for a veteran who is starting a small business. Photo by Daniel Bostwick

The Richard Z. James Grant will be awarded this fall. So far, donations to the grant fund total more than $5,000.

The winner will be selected by James’ parents, Carol and Jake James, Seaford, and their family.

“We’re very excited that Danny has chosen to do this in Rick’s honor,” Carol and Jake said in an email. “We always wanted to do something in his memory, but it never materialized.”

The James Grant is only the most recent philanthropic venture of Bostwick Photography. It follows an effort earlier this year through which the business bought gift cards for a number of essential workers in the county.

This spring, when the nation was struggling with the early phases of the ongoing coronavirus pandemic, the bottom dropped out of his business, Bostwick said. (This year so far, Bostwick Photography’s gross sales are down 92 percent. “We’re making do though,” Bostwick said.)

On a day when he had nothing else to do, he was looking through archives of his photos and came across a picture he had taken of the inside of the curve of an Atlantic Ocean wave. In the background, as though tucked in under the wave crest, is the Charles W. Cullen Bridge, the graceful structure that carries Route 1 over the inlet.

Bostwick posted the photo on Instagram and almost instantly, he received several requests for prints.

“When I saw that, I thought that maybe this was something I could use to earn a little bit of money, enough to pay the mortgage or make a car payment,” he said. So he advertised the print for sale, either in a wooden frame that he would make or just in a mat.

“I thought that it might spur sales if I donated some of the proceeds to charity,” he said. He searched the websites of several charitable organizations, but they all rang hollow to him. Instead, he decided to use 25 percent of the sales to buy gift cards for owners of local small businesses that were struggling.

Bostwick posted information about the available prints at 8 p.m. on a Friday. He anticipated selling about five of the framed prints, and 15 to 20 of the prints in mats. “That would have been a good outcome,” he said.

Instead, by 11 that evening, he had sold 10 framed prints and 30 smaller ones.

With the unexpected windfall, Bostwick expanded his initiative: He bought gift cards to Every Fiber Coffee Co. and the liquor store Liquid Assets, both in Seaford, for ICU nurses, respiratory therapists and janitors at Nanticoke Memorial Hospital. (Why janitors? “Ever clean up after someone sick with a life-threatening virus?” Bostwick explained. “Me neither, and I don’t want to, which is why I was most proud of doing something for them.”)

When he made public what he was doing, even more people bought prints. In the end, he sold 70 framed prints and 170 matted prints, bringing in $30,000.

Half of the proceeds he spent on gift cards to give away. Beneficiaries included workers at the Food Lion grocery store in Seaford, cafeteria workers in the Cape Henlopen, Woodbridge and Laurel school districts and an area food pantry. Bostwick also bought gift cards to the Marvelous Produce stand in front of Lowe’s in Seaford that he and his wife, Jennifer, hand out at random, leaving them on windshields with uplifting notes.

About $1,600 that he had left over was the seed money for the James Grant.

Bostwick said that this whole experience has renewed his faith in humanity. “I’ve always thought that people are inherently good, but that they develop bad habits,” he said. “Now, I believe that given the opportunity to work together to do good things, people will jump on board. It’s shown me that people want to live that way.”

It has also taught him a bit about himself. “I feel like I’m capable of anything I put my mind to,” he said. “When I was looking at all those sales, with prints to make and frames to put together, I didn’t know how I was going to do it. And this was during the quarantine, when you couldn’t get supplies. Getting photo paper, for example, was really difficult. You needed an engineering degree to figure out the logistics. But step by step, putting one foot in front of the other, I was able to figure it out.

“Knowing that I was able to do that gives me peace of mind that the future will be OK. Anxiety about what’s going to happen is not really useful when you have something in front of you to do today.”

As for Rick James, Bostwick believes that the Marine would be happy with the grant that carries his name. “He would find a way to tease me about it, for being too mushy, or sentimental,” Bostwick said. “But he would be proud.”

“Rick would appreciate helping out a vet who has given time and energy for our country,” Carol and Jake James said. “He would think this is really cool.”

While Daniel Bostwick Photography is no longer raising money to help essential workers, unframed prints of the photo of a wave at the Indian River Inlet are still available for sale. For information, go to danielbostwickphotography.com and click on “Supporting Small Business.”

Also on the website is information about the Richard Z. James Grant, including how to submit an application. Donations to the grant can be made by contacting Bostwick, or at gofundme.com/f/the-richard-z-james-grant.