At last month’s Fruitland Chamber of Commerce luncheon at the Redmen Lodge in Fruitland, Wicomico County Recreation and Parks Director Steve Miller spoke to members about the county’s plans to build Field Seven and a Half at the Henry Parker Complex at Naylor’s Mill Road. The field, located between fields seven and eight, will provide individuals with physical and mental disabilities an opportunity to play baseball.

“We want this to be an opportunity for everyone to participate,” said Miller. “We’re really excited about the opportunity that exists here.”

The county will build a modified baseball field so that kids with disabilities can play the National Pastime. The project includes the construction of sidewalks, wide dugouts, fencing, parking, bleachers, and synthetic turf with the bases stitched in.

Miller told a story about how his stepdad stocked his pond in Connecticut and invited special needs kids to go fishing. Miller often served as a buddy for one of the kids. 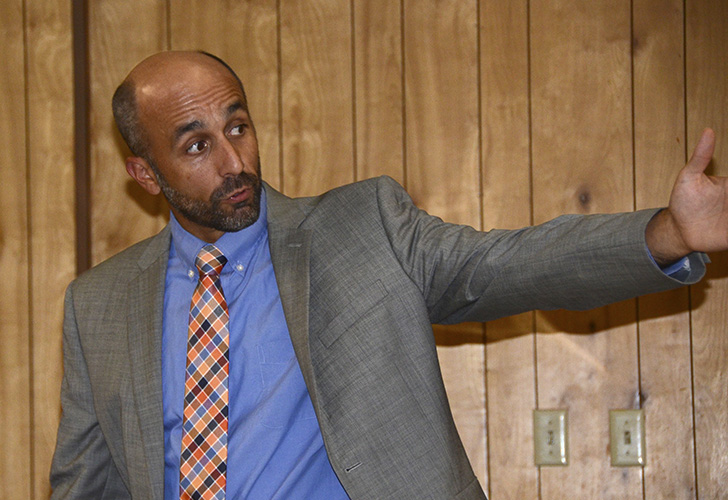 Wicomico County Recreation and Parks Director Steve Miller is shown speaking at the October Fruitland Chamber of Commerce luncheon. Miller spoke about plans to build a baseball field for individuals with physical and mental disabilities. Photo by Mike McClure

“It was special and it was something I remember,” Miller said. “The gift that he gave continues to live on (June marked the 65th anniversary of the derby).”

With no other place for kids with disabilities to participate, Miller believes the county can make a similar impact. The field will host the Eastern Shore Little League Challenger program along with other special needs programs.

“At some point we all come, we all go but the things that we leave behind keep going,” said Miller.

Some other amenities organizers would like to include with the ball park are an inclusive playground, where kids can interact together, and a century trail, which would allow parents to walk around the field while their kids play.

“We really want to make it an inviting place, to make it a place where people with disabilities can participate too. We want this thing to be special,” he said. “They’re (disabled children) not an afterthought, they’re the main attraction.”

The estimated budget for Project Seven and a Half is $900,000. The county is contributing $200,000 and the state is providing $300,000 in grant funding through the the Maryland Department of Natural Resources’ Program Open Space. The other $400,000 will come from private funding, through the Community Foundation of the Eastern Shore. The program’s kickoff raised $90,000 in private funds.

Program Open Space, which provides financial and technical assistance to local subdivisions for the planning, acquisition and/or development of recreation land or open space areas, is providing a $495,000 grant to the Henry S. Parker Athletic Complex. Approximately $300,000 will go towards the development of Project Seven and a half with the remaining funds to be used to continue rehabilitation efforts at fields one through four at the complex, including expanding the dugouts and replacing field dirt to improve playability and drainage. New bleachers will also be installed on field one. These repairs will be phased in over the next two years.

Schumaker Park also received $67,950 through Program Open Space. These funds will be used for Phase II repairs to the parking lot, which has been damaged by erosion and tree roots. Car stops and curbing will also be restored in the lot. The overall project will increase handicapped access to and from the parking areas.

Field Seven and a Half is expected to be built by next spring with the playground and trail being built once the rest of the funds are raised. The Schumaker parking lot project is also expected to be completed by spring 2020.