Correll, who was born and raised in Bridgeville, received the Chamber’s Legacy Award. The award was started in 2019 in honor of first recipients Linda and John Hollis. With last year’s ceremony cancelled due to COVID-19, Correll is the second person to be given the award. 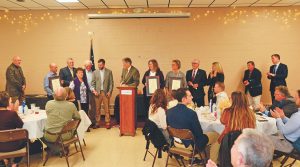 Carson said Correll was being honored for her selfless service, including helping to serve dinners at the Bridgeville Fire Hall, working at the Union United Methodist Church, advocating for the community as a Bridgeville Commissioner and Commission president, and cheering on young athletes (including her granddaughters). She even created the centerpieces for the dinner.

Correll, a Bridgeville High School graduate, received a business degree from Goldey Beacom. She served as a 4H leader for 40 years and is in the 4H hall of fame; has attended Union United her whole life where she has served as a trustee and a Sunday school teacher; and has been a part of the Bridgeville Fire Company Auxiliary for 44 years, currently serving as the treasurer.

Correll said she was pleased that the banquet was taking place in the fire hall’s banquet facility, which has been vacant over the past year and a half due to COVID-19. She said she learned a lot about politics during her time on the Bridgeville Commission and thanked former Finance Director and Town Manager Jesse Savage, who attended the banquet, for helping her during her time with the Commission.

“I wish you all the best and I’m still watching,” she told representatives from the town who were in attendance.

Morris was presented with the Community Leader of the Year Award for over 30 years of community service. Morris raised over $11 million for cancer, women’s health, scholarships, and other causes. She has also served on the Laurel Chamber of Commerce and Western Sussex Chamber of Commerce boards, the chamber’s Bike and Brew planning committee, and as president of Soroptomist Seaford. Morris and the Seaford Nine Hole club organized the annual Pretty in Pink Golf Tournament and she is a founding member of Celebrate Hope.

“If you want to get something done you call Renee,” said Carson.

“What I did through my working career I did because I wanted to help people,” Morris said. “As I stand here to receive this award, it is not just for me, it’s for the community of people who stood shoulder to shoulder with me.”

Morris, a Milford native, has made Seaford her hometown. She recalled when Live for Chocolate, which promoted breast cancer awareness, began on Mears campus with 50 women. She worked with Sharon Harrington and past chamber Executive Director Lynn Harman to expand the event to downtown Seaford and Blades. The funds raised from Live for Chocolate and Celebrate Hope provided no cost mammograms for those in need.

Allen was presented with the Blazing New Trails Award. Allen, 35, served in the Air Force from 2010 to 2013 before beginning his business, JA Pressure Washing, in 2018. In addition to owning the powerwashing business, which is in operation 12 months a year, he also owns Allen Irrigation and Landscape Lighting with his dad, Jeff.

“This is such an honor. It is really motivating to me,” Allen said.

The Business Person of the Year award went to Dr. Sonja Biddle of Betts and Biddle Eyecare of Seaford. Biddle, originally from Kent County, has been practicing since 1989. She purchased the business in 2008 and donates to a variety of causes.

During COVID, Biddle retained her employees and added a second doctor.

Carson said Biddle believes in the golden rule, treat others as you would like to be treated.

Biddle said that during COVID her staff has embraced changes while respectfully and safely helping patients. She also thanked her children and her husband, Frank, for their support.

“They (family) are my biggest cheerleaders,” said Biddle.“This award does not just come to me but to my team and my family.

“The real engine the drives America is small business,” Shwed said while making a presentation to Allen, a Laurel native and Laurel High grad.

“When I came on the Commission she (Correll) was nothing but a world of help,” said Carey.

“Celebrating what you guys have all done is really an inspiration to us,” Genshaw added.

At the beginning of the ceremony Carson presented an appreciation award to Chamber President Matt Parker.