The Woodbridge varsity boys’ lacrosse team went into last Friday’s season opener against Delmar looking to beat the Wildcats for the first time in the Raiders’ short history. Woodbridge held a 4-2 lead at half-time, but Delmar rallied to win the road contest, 8-7. 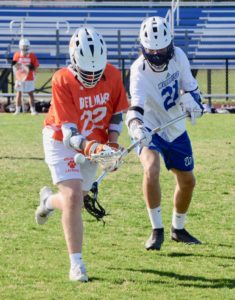 Delmar’s Logan McGill opened the scoring with 9:24 left in the first period. Woodbridge’s Michael Plummer scored off a feed from Jonathon Webb (4:13) to knot the score before the Wildcats’ Damon Nichols made it 2-1 off an assist from Logan Dendorfer.

Plummer netted his second goal with 11:10 left in the second period. Brenton Williams (10:02) and Michael Brummell (7:38) added one goal apiece for a 4-2 advantage.

In the back and forth fourth quarter, Hudson tallied his second goal (11:45), before the Raiders’ Evan Peterson tied the score with 10:31 left in the contest.

McGill intercepted a pass from Woodbridge goalie Aiden Timmons to give Delmar a 7-6 lead with 8:20 remaining. Timmons later made a save on a shot by Parker Lucas. Williams’ third goal tied the score at 7-7 (3:29).

Allen netted the game-winning goal with 42.3 seconds left to give the Wildcats an 8-7 win.

Nichols led Delmar with three goals, McGill and Hudson each had two goals, Allen contributed one goal and one assist, and Dendorfer dished out an assist. Williams paced the Raiders with three goals, Plummer had a pair of goals, Brummell and Peterson each netted a goal, and Webb added an assist.