Delmar holds off Laurel, 24-21, in battle of neighboring rivals

The Laurel and Delmar varsity football teams may be playing in different divisions and last Thursday’s matchup in the final regular season finale may not have made a difference in the playoff pairings, but don’t tell the players and coaches that the annual matchup of the neighboring rivals didn’t mean something.

“We didn’t have to win it but we had to win it,” said Delmar head coach David Hearn. “Everybody felt like this was a playoff game.” 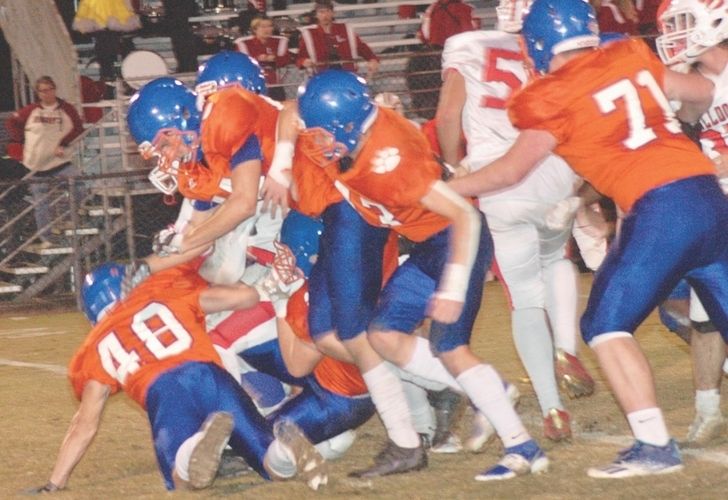 “It (winning) was a big goal. Everyone wanted to do it,” Delmar senior Jaylin Warner added. “We knew they were good this year.”

Laurel used a 59-yard touchdown pass and a blocked punt and return for a score to take a 14-9 lead into half-time. Delmar put together a pair of scoring drives in the second half for the 24-21 win.

“It’s (game against Laurel) always a fight. The adjustments at half-time made the difference,” said Delmar senior Trent Kemp. “It (win) gives us a big confidence boost.”

Laurel opened the game with the ball on their own 41 yard-line following the kick return and quickly went to work as quarterback Kaden Shockley completed a pass up the middle to Javier White who raced 59 yards for a touchdown. Mike Gonzalez-Perez booted the extra point for a 7-0 Laurel lead.

Delmar’s offense started with the ball on its own 43. Quarterback Mark Oakley gained 18 yards on a keeper on third and 15 from the 38 and Kemp picked up a first down with a 17-yard run on third and six from the Laurel 42. Warner capped the drive with an eight-yard touchdown run and Nathan VanZandt added the PAT to knot the score at 7-7 (7:27).

Delmar got the ball back when Jalen Johnson recovered a Laurel fumble on the Delmar 47. Laurel’s Brayden Hearn stuffed Kemp on a run on second and six from the 49 and the Wildcats were eventually forced to punt the ball. The Bulldogs’ Damontra Smith blocked the punt and Kyler Weaver returned it for a touchdown. The extra point by Gonzalez-Perez put Laurel ahead, 14-7.

Warner had a 16-yard run for the Wildcats, who started with the ball on the 39. Delmar moved the ball to the Laurel 21 following a pass from Oakley to Kemp and a Laurel penalty. Hearn, Smith, and Patrick Belle combined for a sack and a nine-yard loss to set up fourth and 14 from the 25. Warner gained six yards after catching a pass from Oakley before being stopped by Weaver to turn the ball over on downs.

White ran for 18 yards as Laurel moved the ball to the 44 after starting at the 19. The Bulldogs were forced to punt fourth and four early in the second quarter, but the ball went over Shockley’s head and he fell on it at the 18, giving Delmar the ball at the Laurel 18.

Laurel’s defense pushed Delmar back a yard before Smith and Jaden Snyder held Oakley to a five-yard gain on fourth and 11.

Delmar’s defense also stepped up and pushed the Laurel offense back. Isaiah Holbrook dropped White for a five-yard loss and T.J. Gibson pushed Belle back three yards on a run. Shockley’s pass on third and 18 from the six fell incomplete, but Laurel was called for a hold in the end zone for a safety to make the score 14-8 with 7:36 left in the first half.

The Wildcats got the ball back on a free kick with Darius Hunt and Warner running for eight yards and Brandon Turner adding a nine-yard run to move the ball to the Laurel 34. Warner ran for five yards on third and four from the 28 to move the chains before Laurel’s Tate Walls intercepted a pass with 1:28 left as the Bulldogs took the 14-9 lead into half-time.

Delmar put together a 65-yard drive to open the second half. Warner had runs of 20 and 13 yards before Turner plunged into the end zone from three yards out. Warner took a pitch from Oakley and scored on the two-point conversion attempts to give the Wildcats a 17-14 lead with 7:15 left in the third quarter.

At the end of the quarter, Laurel’s offense started with the ball on the 35. Belle ran for two yards on third and one from the 44. Delmar’s Bryce Johnson recorded a sack on third and 12 from the 44. The Bulldogs faked a punt on fourth and 23 from the 33, but the pass fell incomplete.

Delmar offense was given a short field for its final scoring drive. Turner had an eight-yard run on third and five from the Laurel 28 and Kemp added a 14-yard run. Kemp scored on a three-yard run and VanZandt kicked the extra point for a 24-14 Delmar advantage with 6:27 remaining in the contest.

Laurel returned the kickoff all the way back to the Delmar 13. The Bulldogs’ Jacquez Parker Cannon recovered a fumble in the end zone for a touchdown following a run on third and one from the four. Gonzalez-Perez’ PAT pulled Laurel within three (24-21).

Delmar’s offense started with the ball at the 35. Kemp had three carries for 13 yards and Oakley gained 11 yards on a keeper on third and six from the Laurel 48 with 2:36 left.

“I felt like we played well on a little bit of a short week,” said Hearn. “They’ve (Laurel) had a great season and they’re not done yet.”