The Delmar varsity field hockey team netted a 6-3 win over Indian River last Saturday in Georgetown in the Division II championship to secure its fourth straight state championship. With the win, the Wildcats ending the season unbeaten, defeating opponents, 139-9, in regular season and post-season games.

“It was a sweet victory. The girls played outstanding. It was a high pace game and that’s what the state championship is supposed to be,” said Delmar head coach Jodi Hollamon. “It was great hockey all the way around. They (IR) played hard. They did everything they could do and so did we.”

“We’re going out with a bang,” senior Morgan Fletcher said of the win. “This is our fifth championship game and our fourth ring.”

“It means the world, it’s just like the last one,” added senior Mya Kemp. 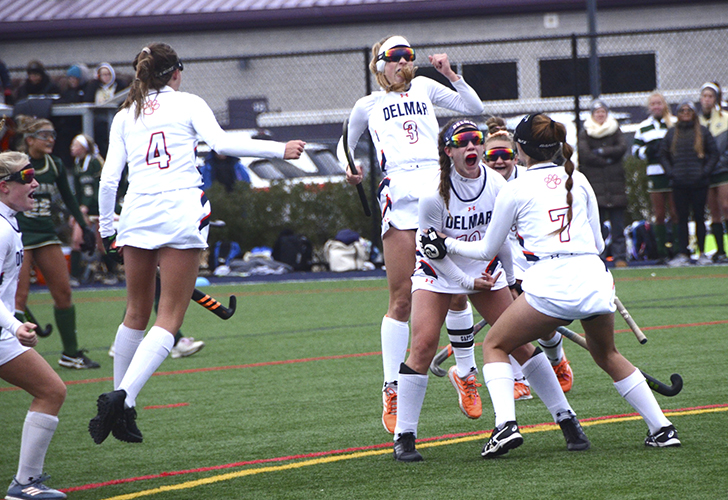 The Delmar field hockey team celebrates a goal by Josie Hollamon at the buzzer to seal the Wildcats’ 6-3 win over Indian River in the Division II state championship game. Photo by Mike McClure

Delmar’s Olivia Twilley tipped the ball in off a shot by Josie Hollaman to give the Wildcats a 1-0 lead with 28:02 left. Indian River answered with a break and a goal six seconds later as Kayler Townsend scored a goal and Avery Congleton picked up an assist to tie the score.

The Wildcats came back with a goal when Morgan Fletcher found Logan Walls whose shot was tipped in by Twilley for second score of the day (24:33). Walls scored of an assist from Maci Bradford with 19:15 remaining in the first half for a 3-1 Delmar lead.

Bradford upped the Wildcats’ lead to 4-1 with a goal with 9:23 remaining in the first half. Walls later had a shot turned back and Kemp’s shot went wide left.

Indian River moved within two with a goal by Congleton on an assist from Townsend with 2:35 left. Delmar, which outshot the Indians, 7-3, and held a 5-0 advantage in corners, took a 4-2 lead into half-time.

Indian River goalie Allyson Clark made a save on a shot by Hollamon on a corner at the start of the second half. Indian River picked up its first penalty corner of the game, followed by two more but could not connect for a goal.

Following four more corners by the Wildcats, Hollamon knocked in a goal off a pass from Laura Rogers on a corner for a 5-2 lead with 19:28 left in the contest.

Indian River moved within two on a goal by Emma Ruley, who followed up a shot by Rylie Cordrey with 8:30 remaining. Walls’ shot was stopped with under six minutes left and Clark made a save on a shot by Hollamon with over two minutes remaining.

Delmar got one last corner and Hollamon scored off a feed from Rogers with no time remaining to seal the 6-3 victory and a fourth state title.

“It takes hard work at practice every day and to come our every game as a team and pass the ball,” Josie Hollamon said of the team’s success.

“We’ve been here before. Just coming back and winning another one is awesome,” added junior Morgan Bradford, who was part of all four championship teams. “It was definitely a back and forth game. It was get the ball out, get it out, and get possession of the ball, that’s what we did. Today there was much pressure and when there was, we stepped up. I’m proud of my defense and my goalie.”