“Words don’t even describe the feeling,” said Davis, the team’s goalkeeper. “It’s just insane. It’s not normal for seniors to win five championships in a row. To be able to do it is great.” 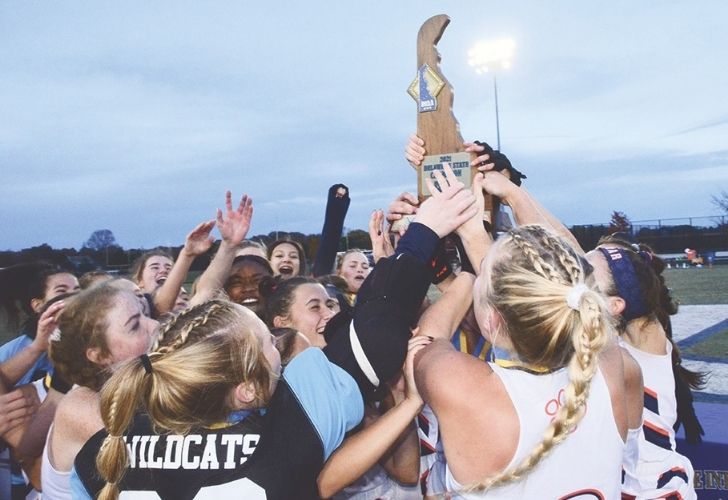 Members of the Delmar field hockey team hold up the Division II championship trophy at the end of the post-game ceremony last Saturday in Dover following an 8-0 win over Newark Charter in the state championship game. Photo by Mike McClure

“It’s the last one. To know I’m not going to play with these girls again is sad,” Shockley said. “It’s great to know that I’m going to end with a perfect five seasons.”

In the second quarter, Josie Hollamon netted the second goal (8:26) and Bradford scored on a penalty stroke with 4:40 left in the first half to make it 3-0. Bradford scored her third goal of the game off a feed from Laela Brown with 1:32 remaining and Lilly Waters tallied the final goal of the half with 10.7 seconds left for a 5-0 Delmar lead.

“Their goalie did an amazing job. It was awesome to finally finish in front of the goal cage,” Hollamon said after the game.

“We just picked up the intensity in the second quarter,” added Bradford.

Jordyn Hollamon scored a goal with 21 seconds left in the third quarter before Josie Hollamon added her second goal of the game with 13:03 remaining in the fourth quarter. Bradford had her fourth goal of the contest with 9:40 to go in the game, making the score 8-0.

Delmar outshot Newark Charter, 18-0, and held a 22-1 advantage in penalty corners. The Wildcats topped the Patriots, 9-0, in the state semifinals last year before topping Caravel in the championship. The team went 15-0 during the regular season this year before winning the Henlopen Conference championship game and going 3-0 in the state tournament. The team went 72-0 during the regular season, 2-0 in the conference championship, and 15-0 in state tournament play in the seniors’ five years with the varsity team.

“Every time is different. There’s a different chemistry, there’s different goals,” Delmar head coach Jodi Hollamon said. “It’s (sixth straight championship) awesome, there are no other words to describe it.”

“It feels really good. We have been working for this all season,” added Jordyn Hollamon.