Outside of the team, its coaches, and the fans, not many people saw Delmar’s 3-1 win over Indian River coming. The Indians, who were ranked third and defeated the Wildcats, 2-0, during the regular season, hosted Delmar (9-6) last Saturday night in the state quarterfinals after the Wildcats edged McKean on penalty kicks earlier in the week.

“There’s not one thing that could beat this. It’s a dream almost,” said Delmar head coach Denny Murray, a Delmar alum. “I told the assistant coach (after the regular season loss to IR) I’d like to see them in the playoffs.” 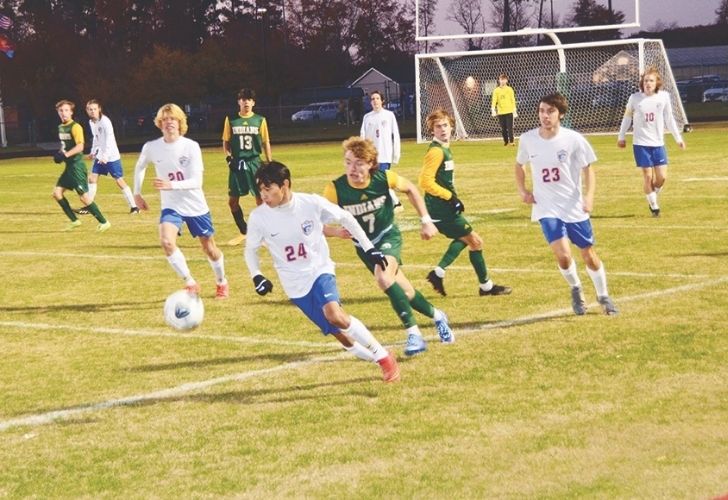 Delmar’s Darwin Lopez-Ponce takes the ball toward the goal last weekend against Indian River. Lopez-Ponce had a goal and an assist in the Wildcats’ 3-1 win. Photo by Mike McClure

“It means everything. We’ve never won a game against them in my time here. When we lost to them in the regular season we wanted them back,” Delmar senior Mason Ball added. “We came out here, we had something to prove. It means everything to keep on going.”

Indian River fired shots on Delmar goalie Carl Kurten early in the game but could not find the net. Ball scored on a kick with 28:24 left in the first half to help the Wildcats jump out on top.

The Indians sent a shot off the top crossbar before the Delmar defense cleared the ball with over nine minutes left in the half. Kurten made a save on a shot by Indian River’s Blake Morgan two minutes later as the Wildcats went on to take a 1-0 lead into half-time. Indian River outshot Delmar, 7-2, while both teams had two corners. Kurten also recorded four saves in the opening half.

Delmar struck again less than one minute into the second half on a goal by freshman Darwin Lopez-Ponce (39:28) for a 2-0 advantage. Delmar’s Damian Kunie took a shot on goal which was stopped by Indians’ goalie Reece Stone. Lopez-Ponce later found Ball on a break who knocked the goal into the net with 35:03 remaining for a three goal lead.

Lopez-Ponce had a break following an Indian River corner and a save by Kurten, but this time Stone made the stop. The Indians’ Luke Veirs scored on a header with 22:25 left to make the score 3-1.

Indian River followed with five corners and a shot that went wide. Kurten also made five saves down the stretch to help preserve the 3-1 road win.

“I couldn’t be more proud of them (defense). That’s the backbone,” said Kurten. “We had a lot of built up adrenaline.”

Delmar played through intensity throughout the game, something that Murray said is typical for this team.

“It’s just who they are. You can’t really coach that,” Murray said.

In last Tuesday’s first round game at AI DuPont, McKean netted a first half goal to take a 1-0 lead. Ball answered at the 25 minute mark to tie the score and the game went into overtime. After a 4-4 tie in the first round of penalty kicks, Delmar edged McKean, 5-3, in the second round to win the contest. Murray said that win helped give his team confidence going into last weekend’s rematch with Indian River.

“We had a good regular season but the win (first round) made them feel like they belonged,” said Murray.

Delmar was scheduled to visit second seeded Caravel (12-3) in the state semifinals on Wednesday night. More on that game in next week’s Laurel Star.