The city council Tuesday night approved a new, five-year contract for the company that is managing the Hooper’s Landing golf course in Seaford.

The 3 to 2 vote followed an unsuccessful attempt by Councilman Jose Santos to table the issue to give councilmen more time to gather information. 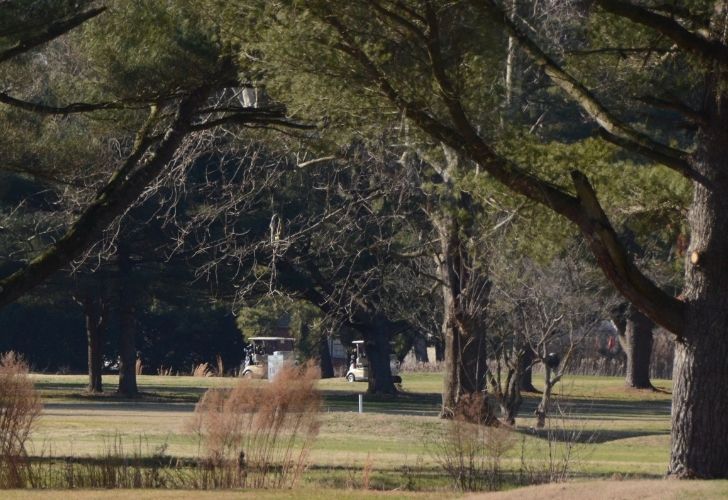 The Seaford Council voted, 3-2, to award a five-year contract to Adkins Management to maintain the Hooper’s Landing golf course, shown above. Photo by Casey Johnson

Santos also asked if the council could hold an executive session, at which the city’s economic director could talk about the golf course and its financial situation. City Manager Charles Anderson explained to him that executive sessions, under state law, are allowed only for specific circumstances, and discussion of finances is not one of them.

The new contract will go into effect July 1. Its provisions are the same as the previous, three-year contract: The city will pay Adkins Management $12,642 per month to operate the course. The city will also pay the course electric bill, pay on the mortgage it has on the course property, buy merchandise for the pro shop, and pay for building and equipment repairs that cost more than $3,000. Adkins will pay for the repairs that cost less than $3,000.

The city and Adkins will share in paying for cart repairs and battery replacements.

Adkins will continue to sell concessions, and will receive all of the income from that.

Adkins Management owner Chris Adkins was at the council meeting. He told councilmen that the number of golfers at the course continues to grow. In 2018, 16,838 rounds of golf were played at Hooper’s Landing. That number is expected to be at least 23,500 this year, Adkins said.

“We are seeing growth because the condition of the golf course is improving tremendously,” Adkins said. In addition, “the pandemic has helped us somewhat. The golf course is a safe place to be, and some people aren’t working as much as usual.”

In 2018, for the first time, revenue exceeded the amount at which Adkins shares profits with the city. That year, Adkins presented a check of $12,500 to the city.

Adkins expects that at the end of 2021, the course will have brought in enough money that the city will receive $135,000.

Councilman King asked Adkins how much profit his company makes on the golf course. “Zero,” Adkins replied. But he hopes that, as improvements are made and the popularity of the course increases, the course will become profitable “within the next couple of years.”

King thanked him for the information. “I never realized that you needed that much revenue in order to be profitable,” he said.

Councilman Henderson said that his one hesitation about the new contract was its five-year life. The city’s previous contract with Adkins was for just three years.

But after hearing about long-term improvements that Adkins plans, included new grass on the original nine holes and an automated irrigation control system, which will mean lower electric costs, he no longer felt that hesitation.

“You are saving open space and preserving something that adds to the community,” he told Adkins. “We owe a debt to you for your stewardship of the land.”

King and Santos both wondered whether course fees could be adjusted so that city residents pay less than outsiders. “Can we provide the residents of Seaford discounts to play there?” Santos asked.

City Manager Anderson said that fees are not set in the contract, but rather are decided annually by course staff and city staff. “Typically, we default to Adkins’ recommendation, but the city can have some input there,” he added.

Deadline to file as candidate in city election one month away

The deadline to file as a candidate in the upcoming municipal election in Seaford is Friday, Feb. 26.

Two council seats, currently held by Orlando Holland and James King, will be decided in the April 17 election. Council terms are for three years.

King was elected to the council in 2018.

Holland was appointed to the council in June 2014, to complete the term vacated when then Councilman Dave Genshaw was elected mayor. He was elected to a full term in 2015 and to a second term in 2018.

Holland has already filed to run for reelection. Also running is Jeffrey Benson, who is currently serving on the Seaford School Board.

Last year, the city approved a change to its charter to allow residents who are registered to vote in county, state and national elections to vote in city elections. But that change will go into effect only after approved by the General Assembly, something that will probably happen as the 2021 legislative session winds down in June.

That means that in the April 17 election, only residents who are registered separately with the city will be able to cast ballots.

The deadline to register to vote is March 26.

A registration form is available on the city’s website, seafordde.com. Under the “Government” tab, click on “Elections” then on “Voter Application” at the bottom of the page.

The city council has appointed a committee to look into a request to annex two parcels of land on Nylon Avenue, a block north of Our Lady of Lourdes Catholic Church. Serving on the committee will be Councilmen Dan Henderson, Orlando Holland and Jose Santos.

The land is owned by Michael A. Reed, Bridgeville, and Robert F. Reed Jr., Seaford. On their application for annexation, they said that Better Homes of Seaford is interested in building housing for senior citizens on the property. The organization’s Virginia Crest Village is just to the west of the Reed property.

“The sale of the property is dependent on annexation and obtaining R3 zoning,” the application says.

City Manager Charles Anderson told councilmen that the property is surrounded by land that is in the city. It is vacant except for a small outbuilding, he added.

Appointing the committee is the first step in annexation. After the committee reports back to the city council, the council will hold a public hearing on the request.

A final decision will be made by the council. Approval of the annexation requires that two-thirds of the council vote for it.