The city of Seaford is expanding a popular program that gives breaks in fees to homebuilders.

This year, the city had planned to forgive water and sewer tap fees for the first 20 houses that were built in a subdivision where infrastructure was already installed. City manager Charles Anderson told councilmen Tuesday night that not quite halfway through the year, the city has already reached that limit, and that building official Mike Bailey was recommending that the city open up the program to another 20 builders. 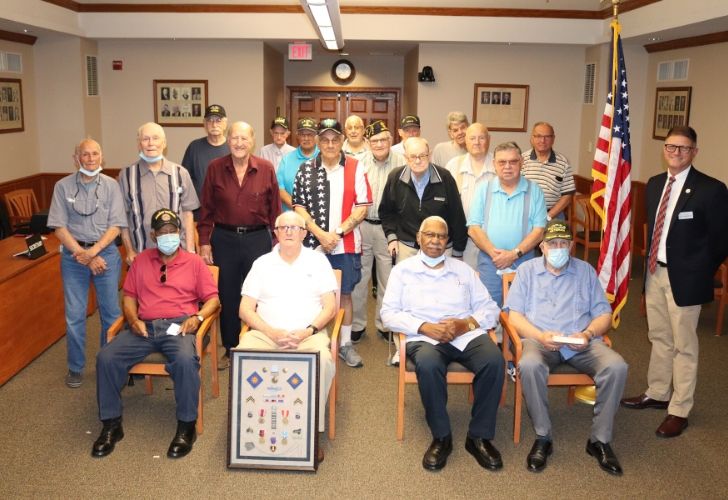 Korean War Rememberance Day- Seaford Mayor David Genshaw recently presented a proclamation which proclaims June 25, 2020 as Korean War Remembrance Day within the City of Seaford and urges all citizens to join him in celebrating this important occasion. Today (Thursday) marks the 70th anniversary of the Korean War.

The council agreed to the suggestion by unanimous vote.

In a memo to Anderson, Bailey said that this is just the second year that the city has reached the maximum number of participating builders since the fee-forgiveness program was started in 2010, as the country was recovering from the Great Recession. Each year, the city offered the incentives to the same number of builders as the number of years post-2000: 10 builders in 2010, 11 in 2011, etc.

This year, 20 homes have been built in Belle Ayre and in Mearfield. Savings to the builders so far total $35,500.

Councilman Matt MacCoy asked whether, if another 20 builders take advantage of the program before the end of the year, the city can open it up even further.

Anderson replied that the city council would have that option. “We will keep track,” he added. “I’m hopeful that the construction continues.”

Livestreaming of city council meetings here to stay– The city of Seaford has an official policy outlining how it will livestream public meetings.

The city council approved the policy during its meeting Tuesday night.

The city started livestreaming its meetings in April, after Gov. Carney’s declaration of a state of emergency due to the coronavirus pandemic. In the first phase of that declaration, the city’s public meetings were closed to the public.

In phase two of the state’s reopening, the city’s meetings are open to a limited number of people. But the livestreaming continues. And under the new policy, which will go into effect when the state of emergency is over, livestreaming will remain a part of the city council meetings.

Anderson said that the city intends to train additional employees to operate the livestreaming equipment, which will add to the city’s ability to make the meetings available. “We want to get the meetings out there,” he added. In writing the policy, “we were just looking at the practical implications of committing to do every meeting.”

Councilman Dan Henderson, who as vice mayor led Tuesday night’s meeting in the absence of Mayor David Genshaw, reminded the council that the process of getting the city to the point that it could livestream its meetings was already underway pre-coronavirus.

“Our mayor had made plans to do livestreaming anyway, and with the pandemic we accelerated those plans,” he said. “I don’t see that we will regress; we will only progress as time moves on. But we should do this in steps. We want to get the city council meeting right before we take on other meetings.”

The estimated cost of Phase 1 of development of Seaford’s new Oyster House Park is $1.327 million. Trisha Newcomer, the city’s director of economic development and community relations, presented that estimate, as well as a funding plan for Phase 1, at the city council meeting Tuesday night.

Oyster House Park is slated for nearly an acre of land along the Nanticoke River, stretching from South Pearl Street east past Church Street. Phase 1 will include an extension of the city’s Riverwalk, new bulkhead and construction of a pier, gangway and floating docks.

The property was purchased in 2018 by the Chesapeake Conservancy and given to the city. The conservancy paid $244,000 for the land, using funding from the Mt. Cuba Center near Wilmington.

Since then, the conservancy has worked to find funding for the park. On Tuesday, Newcomer said that it has secured more than $1.438 million in commitments for Phase 1 of the park. That includes $250,000 from the Longwood Foundation and $100,000 from the Crystal Trust and the Welfare Foundation. It also includes $400,000 from the state’s Community Transportation Fund.

Some of that funding, $230,000, has been promised in be paid in July 2021, at the start of the city’s 2022 fiscal year. Depending on the timing of construction, and on what actual costs are, that could create a shortfall in the 2021 fiscal year. Planners may be able to juggle expenses “so they don’t all fall together,” Newcomer said.

Requests for bids on the project should be finalized over the next month or so, Newcomer added. All bid approvals will come before the city council.

Councilman Matt MacCoy reminded the council that, in the midst of the coronavirus pandemic, the city’s economic future is unclear. “I don’t think that anyone knows the final impact of this pandemic,” he said. “What happens if we get into Phase 1 of this park, and then in Phase II, the commitments fall away? We could be left in limbo, with a project that’s only a third finished. We’re in a completely different atmosphere from when we started this.”

“The future could change for us,” city manager Charles Anderson acknowledged. “But for this project, we already have a piece of land, and we’ve gotten the public excited about the potential of that property. Even if we have to let the plans sit on the backburner for a couple of years, we can still maintain the property. It can be ready for when the economy picks up, and we can hit the ground running.”

The property is the former site of the J.B. Robinson Oyster House, where oysters harvested from the Chesapeake Bay and its tributaries were brought in and then sorted for shipment to regional cities. The park will have interpretive panels, explaining the history of Seaford and the role that the town played in the oyster industry, as well as in shipbuilding. A planned visitor’s center would be a small (about 2,000-square foot) replica of the oyster house.

The park will serve as an access point for the National Park Service’s Captain John Smith Chesapeake National Historic Trail.

In February, the city council approved a master plan for the park.