Blue Raiders hold off Caravel to advance to the state championship

Woodbridge fought “Like 4” in the fourth quarter of the DIAA Division II State Football semifinal game, defeating Caravel, 21-20. Junior Michael Plummer’s interception at the 22nd yard line with less than 40 seconds sent the team to the side line celebrating the victory.

Woodbridge head coach Jed Bell said his of his team, “They just keep doing it for each other with grit and determination; we have been through a lot this year. This feels good and even though we deserve it doesn’t mean it is going to happen. They are teammates by fate and brothers by choice and they lean on each other; we pride ourselves those values.”

Early on the Blue Raiders made some errors, including a fumble by Tyrez Cannon to wipe out his 30-yard carry to the one yard-line. Defensively, the Blue Raiders’ Dalton Perdue hit Caravel for a loss and Kshawn Cox broke-up the pass to give Woodbridge possession.

The Blue Raiders then scored first from the seven yard-line after Ricky Kane pulled in a 39-yard pass and Cannon held tight for the score on the hand-off from quarterback Dalton Perdue. Kicker Xavier Hayes added the extra point for the 7-0 lead in the first quarter.

Woodbridge spoiled an opportunity when Jordan Evans read the route and stepped in for the interception, returning the ball to the end zone but a block in the back called the possession back to the spot of the interception.

In the second quarter, Perdue and Dylan Yocum put the stop on Caravel’s leading rusher Ethan Potter, but the senior, who committed to Villanova, opened it up and carried the Buccaneers to the eight yard-line. A pass was completed to the end zone to tie the game and before the half Caravel would take the seven point lead when Potter broke through the line and ran for a second touchdown. 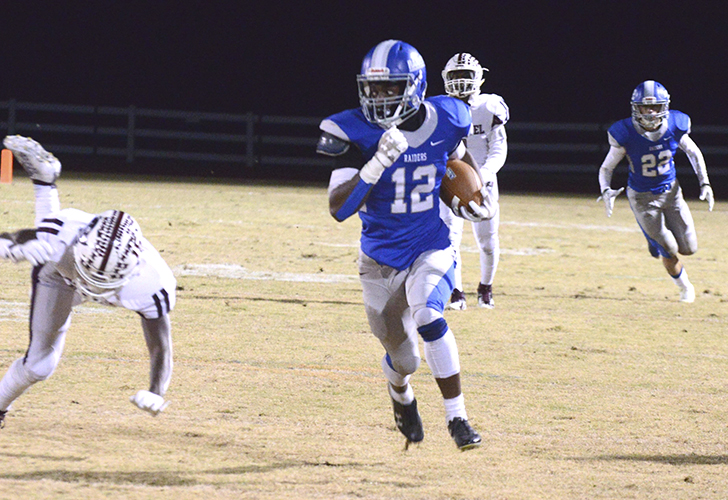 Raiders’ defensive back Jordan Evans looks to gain yardage after intercepting a pass in Woodbridge’s 21-20 win over Caravel in the state semifinals. Photo by Bernard W. Carr

The game got a little heated in the third quarter and yellow flags filled the air leading to an eviction of Caravel’s David Gourdine on a personal foul. In the final moments of the quarter, Ricky Kane’s first down catch placed the Blue Raiders into Caravel territory.

Coach Bell said the coaches got together in the locker room, “We made some adjustments at half time and talked some things over and guys stepped up to make plays.”

The team ceremoniously holds up four fingers at every start of the fourth quarter and this quarter would drive the Blue Raiders to the state championship game. Cannon moved the chains to the 27 yard-line and Perdue, who was briefly sidelined after a blind side hit to the hip, made a lateral pass to Jordan Evans for the score with 10:44 to play in the quarter to tie the game. An interception by Jayquon Massey at the midfield and a return for a touchdown erupted the crowd and gave Woodbridge a 21-14 lead.

Caravel scored with just under six minutes to play in the game on a 23-yard touchdown pass. Coach John Reed went for the lead and failed to convert the two points when the Blue Raiders’ defensive line pounded running back Ethan Potter for the stop. Woodbridge was forced to punt on fourth down after a penalty pushed them back 10 yards. Perdue punted the ball for a touchback and Caravel took possession on the 20 yard-line with 50 seconds left in the game. Woodbridge’s Or’mon Sanders broke through the line and forced Caravel’s Cameron Brown to get rid of the ball, resulting in an intentional grounding call.  The Buccaneers missed a pass and on third down.

Plummer said of the interception, “I just had to cover the wide receiver and it was under thrown, and it was there for me and I got it. That is like the most exciting thing that has ever happened to me all year. The whole team was excited and we are heading to the state championship.”

Coach Bell spoke of his defensive players, “Both guys are big time defensive players, Jayquan Massey and Michael Plummer are both all-conference kids on the defensive side of the ball. It doesn’t matter who we play, it is the state championship and you know it will be a quality opponent. We have a target on our backs, we won two out of the last three and are defending champs. We have what everyone else wants and we will do our best to go up there and defend it.”