And the Grammy goes to……

The group SOJA won a Grammy award for best reggae album during the April 3 ceremony in Las Vegas. Seaford native Trevor Young, the group’s lead guitar player, was among the recipients. The following are Young’s answers from a recent email interview:

To win a Grammy feels amazing. I have worked all my life to be a musician and to think we were just awarded the highest honor in the musical community is really special to me. It was a moment I will cherish forever. 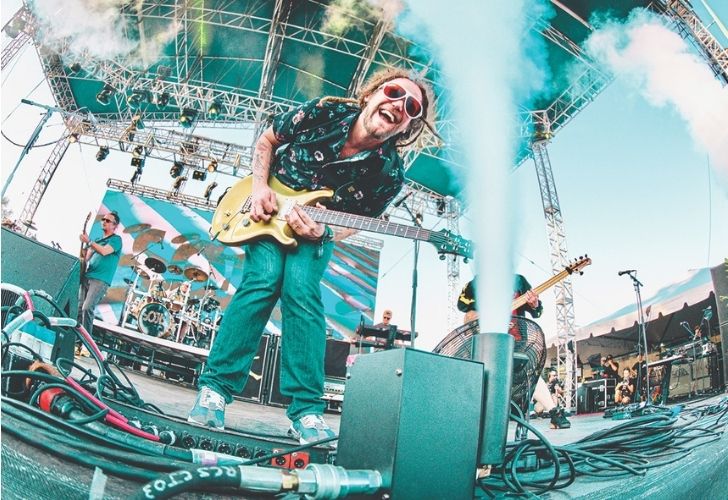 Seaford native Trevor Young, the lead guitarist for the reggae group SOJA, is shown during a concert. The group recently won a Grammy for best reggae album. Submitted photo

2. What has the past week or so been like since the Grammys?

It’s been a balance between celebrating and resting. I flew home the day after the Grammys. My wife flew to Charleston, SC for five days of work. So of course all my local friends in Baton Rouge, where I currently live, wanted to see me to hear about the experience. I have a pretty solid group of friends here, more like family. So they are very supportive and it was an exciting time coming back to see them after such a win. I was pretty exhausted though, I had been in North Carolina for four days before I flew to Vegas then home. I’m normally pretty used to the travel but after the past couple years I guess I’m out of practice.

3. What was it like growing up and going to school in Seaford?

Seaford is special to me. At the time I hadn’t seen much of the world. Seaford is a pretty small town but it never felt that way to me. Riding my bike across town felt like going cross country. I met some of the most incredible people and developed friendships that I still cherish today. In fact one of my oldest buddies is getting married next month and I’m in his wedding. We grew up in the same neighborhood where my mom still lives today.

4. Did you ever dream that you’d win a Grammy?

I never dreamt I would ever win a Grammy, and in the moment right before leading up to it I still wasn’t sure I was going to win one. They really do a good job of not letting you know what’s going on. I know some awards shows they let you know ahead of time so you can prepare a speech. Not the Grammys, when they open that envelope everyone finds out at the exact same time. I think that makes it even more special. You’re really seeing peoples true feelings and how they are reacting.

5. What role did music play in your life when you were growing up and who were your early influences?

My dad is my biggest musical influence. He wasn’t any sort of musician really but he brought home an electric guitar around the time I was in third or fourth grade. He learned and showed me a couple riffs but I sort of just liked the idea behind the guitar. It seemed cool to me. I liked plugging it in and turning on the distortion. Before I got serious with playing I would make necklaces and earrings out of guitar picks and sell them at a local music store. It wasn’t till a couple years later when some other friends picked up instruments that I realized we could play music together. That’s when I really started to get into it. I was in jazz band all through high school and once I got a driver’s license I started working at the local music store. That store is Seaford Music and is still in business today.

6. How did you end up performing reggae music?

I had always dabbled in reggae from playing cover songs from bands like 311 and Sublime. They weren’t really reggae but they had reggae aspects at certain times. I had always known and played some Bob Marley and knew about some of the bigger names like Peter Tosh and Buju Banton from my dad. It wasn’t until working for SOJA that I really had to do my homework.

7. What has the journey been like getting to this point, joining and performing with SOJA?

The journey has been hard work but has been amazing. I started working for SOJA as their guitar/stage tech. I was a roadie, first one into the club the day of the show and last out to go load the trailer. After they released their first major label release “Strength to Survive” Jake asked me to learn all the songs because I was going to be in charge of the auditions for lead guitarist. I was like “ok so I’ll be teaching them the songs and picking the best guitarist.” He was messing with me of course and later told me the job was mine. It was an incredible moment for me. We then flew to Costa Rica to perform a show and did our first rehearsal as an eight piece band. For the next 10 years we traveled all over the world playing shows on five different continents.

8. What has the support of your friends and family been like throughout your life and your career?

I’ve been lucky to have the most supportive family and friends ever. I imagine for some people growing up and only wanting to do music must be tough on their parents. It’s a tough industry to succeed and go on to the next level in. A lot of people get stuck and end up having to change professions and I was never willing to do that. As long as it was music related I knew I would be happy, so I worked in the music shop, taught music lessons, played in cover bands, played acoustic, and tried to learn as much about the industry as I could. I wanted to be well rounded in case the dream of traveling around with a band didn’t happen. Thank you again to all my family and friends for their support. Growing up, every weekend the go to thing to do would be go watch our local band. We had the support of everyone in Seaford.

We are currently/and always working on new music. We all for the most part have home studios so we can be working even when we aren’t together. This summer we have a seven-week tour lined up with some of our favorite bands and we are really looking forward to that. It’s been almost three years since we have all been in a tour bus together. Hope to see you guys out on the road.

SOJA is scheduled to be in Atlantic City on July 7, in Richmond, Va. on July 12, and in Baltimore on July 30. Visit sojamusic.com for more information.