A new firetruck-tanker will eventually join the ranks of other emergency vehicles in Bridgeville later this summer. At the town of Bridgeville Commission meeting, held at the Bridgeville Library on Monday, the commissioners voted, 5-0, to allocate $77,962 to help pay for the fire truck.

Town Manager Bethany DeBussy explained that the EM Fund Program is made possible through fees from building permits. DeBussy stated earlier that in December alone, 33 permits were granted, many for new homes. Funds acquired from the permit fees are divided between the police and fire departments. DeBussy said that, due to the increase in permits, over $155,000 was accrued for the EM Fund. 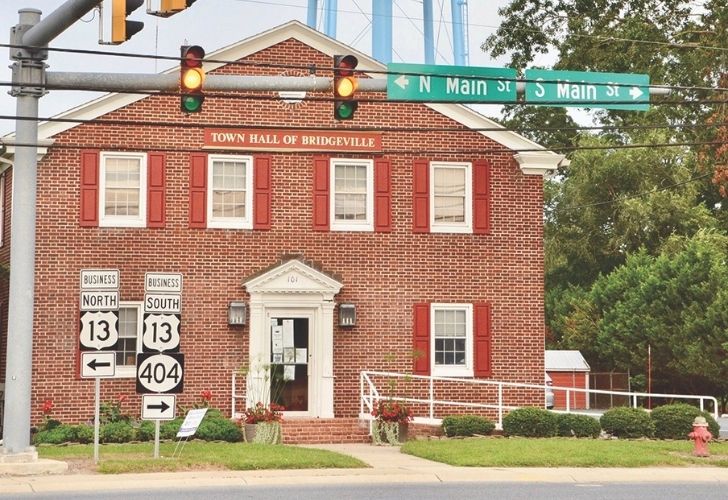 The Bridgeville Commission voted to close town hall to the public at its meeting Monday night. Commission meetings will be held virtually. Photo by Mike McClure

Commissioner Marlene Saunders asked if the funds collected are used for other emergency services besides the police and fire departments, such as Code Purple or Community Action. Solicitor Dennis Schrader then pointed out when the fund was created in 2006, it was designed as a fund for emergency services providers, and such funds do not revert back to the general fund.

Also, the commissioners voted, 5-0, to temporarily close Bridgeville Town Hall to the public. President Tom Carey cited the new mask mandate declared by Governor John Carney and concern regarding higher hospitalization rates as a reason to temporarily shut down town hall and go back to virtual meetings.

Various commissioners added reasons why they felt it was a good idea to go to Zoom meetings, temporarily, for at least the next 60 days. At the meeting, it was revealed that COVID concerns were also the reason why the Appreciation Night dinner for the Bridgeville Fire Company has been postponed.

• The town of Bridgeville received two donations from the United Methodist Church, slated to assist in the municipal park project.

• Robin Bohn, the Bridgeville Police secretary, retired, with no replacement hired as of the date of the commissioners meeting.

• The town received a thank you from the McDowell family regarding a $500 donation to St. Jude’s hospital.

• Two million gallons of water was unleashed when a water main break occurred in Bridgeville when a valve failed. Appreciation for the quick work done in 26-degree temperatures was duly noted.

The next Bridgeville Commission meeting will be held Monday, Feb. 14 at 7 p.m., via Zoom.