A proposed new ordinance was introduced at the Blades Town Council meeting July 12. As heard in the first reading, Ordinance No. 435 states: “The Town Council has deemed it necessary to establish a contractor license in order to ensure the safety and welfare of residents and their property while engaging a contractor for construction or maintenance work.”

Blades Mayor Robert Atkinson said in the past he had opposed any imposition on business, but some people are taking advantage of others, particularly the elderly. “This protects the homeowner. It recognizes legitimate contractors who deserve to protect our residents,” he said. 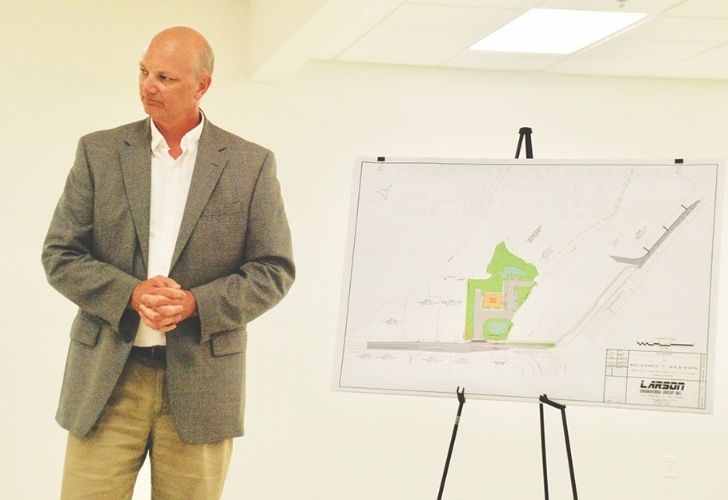 At the Blades Town Council meeting on July 12, Douglas Liberman of Larson Engineering Group Inc. described plans for construction of a 4,800-square-foot building next to the proposed 7-Eleven at the intersection of Route 13 and Concord Road. His company will do site work for the entrance and two storm water ponds. Construction is expected to begin in the fall. Photo by Carol Kinsley

In addition, all contractors and subcontractors shall maintain insurance coverage for bodily injury and property damage liability listing the town of Blades as the certificate holder.

City officials who are authorized to perform inspections “shall have the authority to enter the premises to inspect at all reasonable times.”

Two other resolution changes — one regarding building permit rates and penalties and the other regarding cemetery bylaws — were accepted as written with provision that the dates be changed since there was no official council meeting in June and therefore, no second reading.

Liberman’s group will create an entrance to the property to be shared by 7-Eleven and an additional 4,800-square-foot building. There is no tenant for the second building at this time, Liberman said. Larson Engineering will also build two storm water ponds.

He added that plans have been through DelDOT and Sussex County Conservation Service. “We are working on their comments,” he said. The project still needs approval from the Department of Natural Resources and Environmental Control and from the fire marshal. “We will try to wrap this up in a couple of months so construction can start in the fall,” Liberman concluded.

The mayor, noting the town celebrated its 100th anniversary five years ago, hinted there are other “big plans I can’t get into yet.”

In his police report, Police Commissioner Donald Trice reported “a person of interest” in the investigation into a recent homicide is currently incarcerated on unrelated charges. Also, steps were taken to clear up issues with drugs and gunfire on West Third Street.

Trice said the town would soon lose an officer, Cpl. Thompson, who is going into another line of work. Police Chief Paul Anthony would like to keep Thompson on part-time as an instructor, Trice said. Citing liability issues and other concerns, the council voted instead to end his connection to the town. Atkinson commented, “Thompson is a fine officer whose performance is a credit to his uniform, but at this time we do not want to obligate ourselves to the extra payroll.”

Trice noted the discrepancy in pay scale for Blades’ police officers compared to those in surrounding towns of similar size. In order to be competitive and recruit new officers, he suggested increasing the pay scale by $2,000 for each of the two remaining officers. He also proposed promoting Victor Matos, who has worked for the town since 2017, to the rank of sergeant. Both measures were approved by the council.

The police chief’s contract ends May 1. Commissioner Trice and Vice-Mayor Michael Smith drew up a new, standard contract to be used henceforth for the position. A motion to go ahead and offer the new contract, which would be in effect until May 2025, was approved. Anthony had previously stated that he wanted to be able to plan his future retirement. Atkinson noted that Anthony had retired from Delaware State Police to come to Blades. “He has been excellent in getting grants. He has saved the town a lot of money,” he said.

Smith reported that Planning and Zoning in May had approved changing a lot line on Peninsula Oil Company property so some tanks could be moved.

In July, Planning and Zoning approved the combination of two lots in Little Meadows and plans for a house on Summit Avenue.

With the lifting of pandemic restrictions, Smith continued, DNREC is back to work and its review on the Nanticoke Dry Cleaner property (a brownfields site where EPA has completed studies) should proceed. DNREC will set up an office in the business park on Brickyard Road where the Sussex County paramedic office was.

Since restrictions have been lifted, Town Administrator Lisa Marks reported water to seven homes was turned off because of past due balances. Delinquent tax bill payers are also being contacted. Many of these bills had not been received because of problems with mail delivery, she explained. “Residents are being fabulous. We are working things out,” said Marks.

A press release earlier in the day announced the U.S. Department of Agriculture has given a loan of $4.7 million and a grant for $3.7 million “that will be used to build a water treatment plant in Blades, Delaware, to properly secure and maximize the effectiveness of the existing temporary granular activated carbon vessel by installing it with vital sampling taps, flow meters, a redundant vessel and by passing. The proposed facility will provide adequate treatment for the town’s drinking water…”

The town of Blades also received a grant of $731,000 for the same purpose. According to the release, “Other funding for this project includes $973,641 from the State of Delaware Drinking Water State Revolving Fund.”

Complaints were again aired by residents of Little Meadow regarding flooding and who is responsible for storm water problems, whether the county, Sussex Soil Conservation District, the town or Little Meadows Inc. (Housing Unlimited).

“I’ve never been in a town where a private entity takes care of storm water,” commented one resident.